Back. I’m back at the Tap; I know what I want, what I really, really want; but I’m not a Spice Girl and I’m not disappointed. I’m all psyched up, pint of mango cider in hand, and I’m really feeling it!

(CHECK OUT THIS SPACE FOR COOL PIC OF JAY IN GINGER SPICE GEAR – COMING SHORTLY!)

But, on a quick perusal of The Tap, it’s pretty evident I’ve been brought here on a false premise. Our Comedy Club booker, PJ, assured me that I’d be blogging about the world-renowned comedian, Jason Ventris. But PJ’s been less than truthful (No surprises, there! What else from a retired DFS Salesman?)!

What I’m actually now looking at is – a fashion shoot for the maternity section of Wallmart! I’m more-than surprised that such a successful American fashion chain would choose to branch out into Sudbury. Sudbury? Sudbury – the home of Wynch and Blatch?

But why not? Why not? And what an opportunity. If I blog about Wynch and Blatch, nothing will happen. But Wallmart? This could be my lucky break! With Wallmart,  I might just blog myself into the big time. I might even go viral.

Okay, it’s true that I almost did go viral, when I slipped the word Nike into my last blog post – but going viral in Hartlepool and Stockton, even if the majority of my living ancestors haunt the North-East, is hardly on the same scale as going viral in the U.S.A. Boston, New York – Hollywood? Hollywood? Is Hollywood ready?

‘Jason looks stunning in a high-waisted-mango number. The puffed-out sleeves and the matching neck ruff really enhance the most shapely and meaty parts of his bod.’

Jason Ventris is here. And I’m here. And we’re both in The Brewery Tap in the very, very small market town of Sudbury. It’s funny, but Jason doesn’t seem quite so ‘big’ anymore. I’ve got a sewing needle in my rucksack (It was a long journey down the hill, from suburbia to the hub!), and I imagine that, if I stick it in right now, during this very nano-second, into the front of that ginormously-juicy mango number, the explosion will be loud, the excitement and euphoria short-lived, and Jason and I will be left – with him looking and me feeling – pretty d*** flat …

It’s tempting, but I ignore the calls of my sewing needle, and make an effort to refocus. Jason’s ranting on about some traumatic occasion when he needed a p**s in Wallmart and when the just-as traumatised-and-underpaid shop assistants responded with a “Sorry, honey! No, we don’t sell that here!” 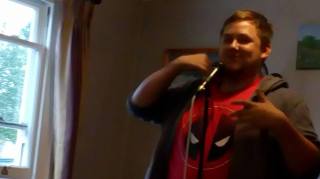 In Wallmart? Jason’s actually been in Wallmart? He was in the USA? He was in Hollywood? Things are looking up. I’m whipping out my bicycle pump (my rucksack’s a dead-ringer for Mary Poppins’ hold-it-all cloth bag), and I’m pumping it up. I’m here, in Sudbury, in The Brewery Tap, pumping it up with Jason Ventris. He’s looking big. We’re both looking big. And ..

PJ’s got hold of my sewing needle …


(1) Why the f*** am I asterisking out what Rupert Grint shouted out very loudly, and very repeatedly (If ‘very repeatedly’ is not good English, then Jay Cool has just made it so!), to his best mate Daniel Radcliffe, under some kind of perfectly legitimising (split-infinitives are now legal tender too) Code of Conduct for Wizards.