Only five more days left of the day job. Time to prepare for the wind down!

I turf out all the junk mail that’s been accumulating in my stylish picnic basket and fill it to the brim with delights. Lots of healthy fruit – a water melon, bananas, tomatoes, etc. And, even some veg – a bunch of spring onions! All set. Whoops, forgot the chocolate croissants – my main course!

And it all looks extremely pretty and artistic laid out on a picnic table in Great Cornard Country Park. I congratulate myself on the arrangement and capture the moment with my Nokia.

The water melon benefits from a close-up shot:

And then I acknowledge the truth. Sprog 3 and a sproggling friend were the real artists involved in the set-up. But, if one has produced a talented sprog that has teamed up with another talented sprog, then surely one is entitled to steal the outcome? Besides which, then my Nokia took these photos.

Being me, within a few seconds, my feet start to itch and I trip-trap across a little footbridge to capture a view of a promised land.

Hubby assures me that if I walk through the golden wheat field and into the horizon, I’ll find a viewing platform enabling me to get a snapshot of the mere.

First, I explore my immediate surroundings. Who knows what trolls might be lurking? 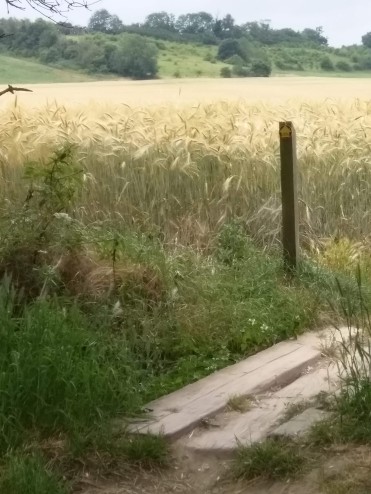 Then the sprog in me, who wants to save the best til last, doubles back, and proceeds to wander around the perimeter of the picnic area – to track down anything interesting in the undergrowth. And, it’s not a bad collection:

But, within minutes, my red shoes take control of the situation; I’m left with no other option but to cross that bridge and go for gold.

As I’m sure you’ve gathered by now, I, Jay Cool, am not one to ignore anything that’s going on below, so I zoom-in … 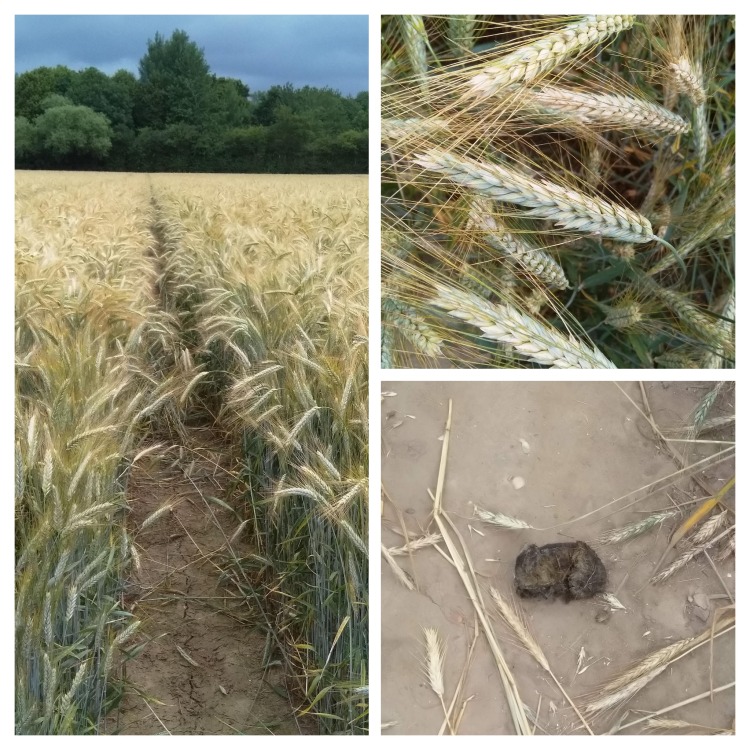 And I cannot but help but feel proud of the outcome.

With mounting confidence (my photography is sure to earn me a commission with the Suffolk Norfolk Life magazine, or even with a spot in The Guardian’s top 20 photographs of the week list), I take a tour of the local property hotspots. 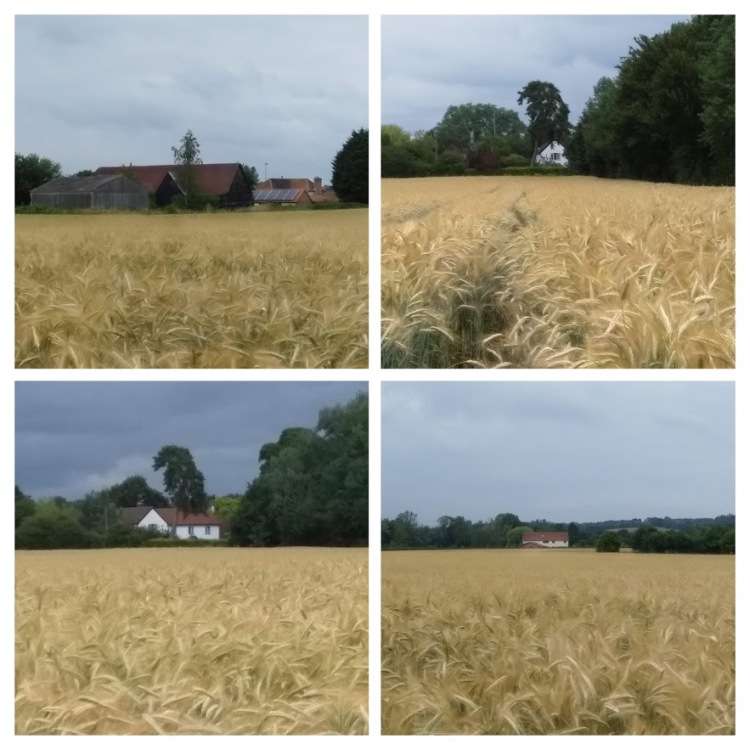 I pause a while and contemplate sharing my property collage with the Sudbury branch of Bychoice, but come to the realisation that, as far as Jay Cool is aware, these buildings are not ‘For Sale’!

Time to refocus! And time to go wild with splodges of pink, purple, yellow and … more pink! I could give those splatty-paint modern artist dudes a run for their money!

Which do you prefer: Jay Cool’s wild-flower collage, or this watery effort (sorry, Edith!)?

To be fair, then I rather like the above piece – reminds of a carpet burn I once had that seemed to eat further and further into my skin when I kept on dousing the scab in Dettol! Nobody told me that Dettol is supposed to be diluted and, no, I couldn’t be bothered to read the label – I was a lazy University student, lacking in any morsel of common sense!

I reach the horizon. Hubby told me to turn left at the end and I would find the aforesaid viewing platform. Following my orders, I go left and follow a line of trees along the far edge of the wheat field. I see nothing but a wall of trees! But, at the corner, I take a right turn in the hope it will take me beyond. A footpath lined with yet more trees takes me up a gentle slope and a series of steep steps.

The mere does not exist anywhere, except in my Hubby’s imagination. I see no mere, but I do see an old geezer hovering around near the bushes in safari gear. He looks annoyed by my sudden presence. Perhaps he was hoping for a rarer species of bird to turn the corner. And I also see quality! Forget the field of Rose Gold wheat (only 9 carat); the fields beyond the beyond must be higher up the hierarchy than the 18 carat Yellow Gold stuff.

And, what’s more, the poppies must have more value than a Monet original! 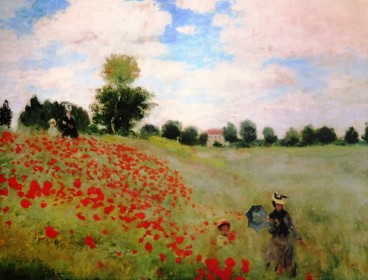 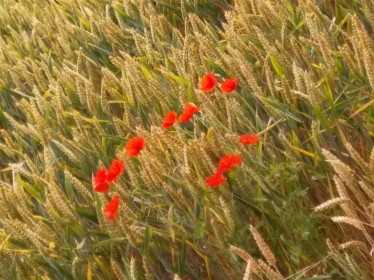 The scenes are fabulous, but on hitting the road leading out of Great Cornard and into Bures, I think its best to turn back and rejoin the picnic party. En route, I find a couple of recesses – squares of freshly mown grass adjoining wooden fences – are these the viewing platforms? Surely not! 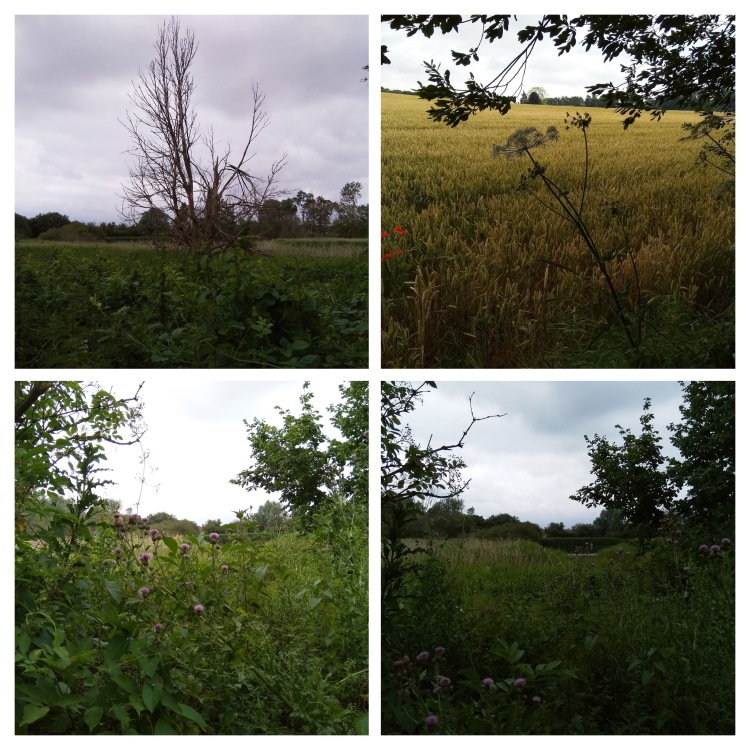 There are no views to speak of, and no mere, but I hold my Nokia up high and take some pics anyway – just in case the outcomes look better when seen from the vantage point of my laptop.

When I re-emerge at the point of the horizon and commence back down the Rose Gold wheat field, a new sense of determination takes hold of me. Instead of rushing forth to the picnic area, I take a left turn – through what may or may not be a footpath – submerging myself in wheat. I can hear running water – the mere must be in this direction! Spotting a gap in some hedgerows, filled in with a wooden fence, I think – this must be the moment! The mere is over there and I, Jay Cool the adventurer, need to get to it.

If the path on which I stand is very possibly not a path, then the route through the wheat to my chosen destination is absolutely not a path – but that’s no matter! Nothing can stop me now! I wade through, doing my best not to flatten any stems. Not sure why I’m quite so concerned when the kernels will end up in my bread at some point anyway! But, because I am Jay Cool the environmental guru, I like to be able to sleep at night with a clear conscience.

Cutting to the chase, or to the carbohydrates in the endosperm, I arrive at the edge of the wheat field only to find my path to the fence barred by lots and lots and more lots of nettles. Aaaarrrrrgh! Thanks to my Poundland shorts, My legs are completely naked (and, no, the rest of me isn’t) and I don’t even have a protective layer of hair to defend me (yes, earlier this morning, I gave into social expectations and got to work with a pink-plastic disposable razor (again, from Poundland)).

But, this is Jay Cool. And Jay Cool is brave. I take the plunge and go for it.

I’d like to say that the victory stop was worth all of the pain, but I’ll allow you to judge that one for yourself.

Is this the mere, or just some rich person’s garden pond? Gutted and slightly concerned that I might be caught snooping, I take a runner back from whence I came (if I’m quick enough, the stings won’t hurt and the wheat stems will bounce back up again).

On my return trip via the Rose Gold wheat field’s designated footpath, I notice an area of wheat, about double-bed size, completely flattened. Have I just missed Tommy and Mollie-Mai? Are they on the run from Love Island? And there was I – worried about breaking a couple of stems!

A few more steps – and I locate my next victim!

Hubby, why did you tell me to look at the mere? There is no mere! You sent me on a wild goose chase … and not for the first time either!’

‘But, how could you have missed it? Didn’t you see the viewing platform – that little square of lawn, cut into the hedgerows, next to a fence?’

‘That? THAT WAS THE VIEWING PLATFORM? I was there and there was definitely no mere!’

‘What? How could you not have seen it?’

And, I saw a wooden fence, and a square of lawn, but I did not see anything resembling a mere!’

Hubby’s still looking aghast, so I show him the evidence.

‘Oh,’ he laughs. ‘Oh, I forgot that you are shorter than me, and wouldn’t be able to see the same view!’

A chocolate croissant, a couple of tomatoes and a banana dipped in coffee later, I’m off again. I’ve been chomping at the bit (Hubby’s favourite phrase) to get back and photograph some of the wild flowers that wowed me on our way into the park, via the allotments. I take leave, again, of my company, who are still eating. I mean, how long does it take to have a picnic? I’ve already seen half the world in the time it’s taken that lot to chew the cud!

And now, to you my one loyal and devoted reader (Ricardo Scribblero), I present the other half of Jay Cool’s planet. So, suck it up!

Oh dear, never mind the au natural look – my grey roots need touching up! Was I grey, before my poet friend, the old man Ricardo, talked me into going as orange as Stacey Dooley? Surely not?

‘Come on, Sprogs! In the car! We need to stop by at Poundland for an orange top-up!

No, no, it’s alright. Dad doesn’t need to get in too! He’s staying right where he is!

HERE’S MY NOKIA, HUBBY! FIND YOUR FICTIONAL MERE AND GET SNAPPING! SEE YOU LATER!’

Image of alligator explorer by OpenClipart-Vectors from Pixabay.