It’s that time of the month again!

And, no I’m not talking about my menstrual flow. I’m a middle-aged woman – give me a well-deserved break!

It’s that time – first Wednesday of the month! Brewery Tap time! Time for a laugh with another of many hilarious Suffolk Punch Comedy Club gigs.

I say, it’s time, but in reality I, Jay Cool, am completely out of time. Not only has my £10 watch from QD Stores conked out, but I’m also twenty-five minutes late for the gig. PJ, why didn’t you tell me about the change to the start time?

You did? Well, that’s news to me, but then I have been a little pre-occupied with my Day Job of late.

I am, at least, in time to catch the last five minutes of the first act. He’s got big-brown puppy dog eyes and looks like every granny’s dream.

But, from what I, Jay Cool, can gleam from a few abbreviated minutes, then this comedian – this innocent-looking piece of manhood, is only every granny’s dream because he comes cheap! Cheap  because he has no conscience whatsoever about manipulating homeless people into giving up their daily bread to him.  No danger of this grandson trying to muscle in on the lion’s share of granny’s inheritance. This one’s quite able to fend for himself!

As cute as Comedian 1 is (no, I don’t know his name – I told you, I arrived late!), I find him hard to recall, once I’ve clapped eyes upon the next sexy number (see, he’s already fading away). I say sexy, because Comedian 2, is my doppelganger.

Not in looks (because, obviously, no-one can compete with my mango orangeness!), but in spirit (my grandmother was in training for a mediumship and, I too, have the gift!).

Being serious, because seriousness is my speciality (my hobby between seances), then Comedian 2 is sexy, just like me, due to her all-consuming obsessions with 1) cystitis 2) symptoms of the menopause and 3) having a good old rant about gagging orders! I laugh a lot when she starts on about being the ‘oldest person in the room’, mostly out of relief, rather than because of her joke (although that was, of course, hilarious!) – relief because, this statement is for the first time in a long time, correct! At forty-nine, I, Jay Cool, have been pipped to the post for the oldest punter, by a fifty-year old! This is fabulous! Comedian 2 is wonderfully old, I’m young and, as long as I can convince our emcee, PJ, to keep on inviting this lady back and back and back again, I will remain – forever young.

Welcome to my immortality!

Comedian 2’s jokes are now all ceiling-lifting funny, even the one about Vladimir Putin being a ‘bit of a hotty’!

Although, it has to be said that I do wonder, why our funny lady – faced with a choice between hunky Vladimir and a stylophone-playing loon, opts for the latter.

Yes, the latter turns out to be Comedian 3, Dan Rubinstein!

He’s Hubby to Comedian 2, and he sings on and on and on – and even some more on – about Rolf Harris, Jimmy Hendrix and anti-gravity pubs – ending with a pledge to make the stylophone the UK’s national instrument! Hold on there, matey, my playground whistle is definitely the biggest contender for that title! Move over!

The stylophone freak’s kind of funny in a funnyish sort of a way, but my mind’s still full of muscle – Vladimir’s muscle! Strangely, but not so strangely, when you consider my skills of mediumship and all of its various lines of communication, I did once, produce a most-artistic representation of Vladmir’s muscle. At some point, in a future (or perhaps a past post), I will have to share it with you (I know you all want to see it!), but for now, here’s something really hot! 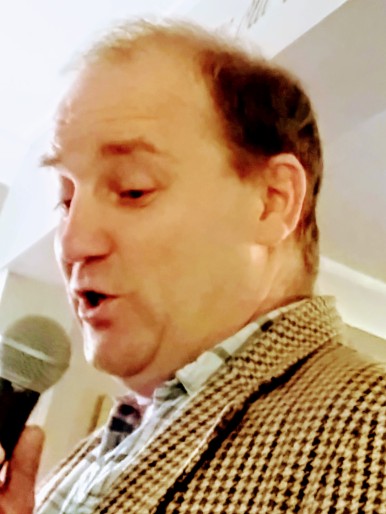 Nigel’s middle-aged and right on it! Literally! (Had to put the word ‘literally’ in, because it’s every young person’s in-word at the mo, and if I keep carrying on about fellow-comedian’s suffering from midlife hilarities, I’m going to be accused of alienating any punter under the age of about forty-five from contributing to the statistics on Google’s keyterm ratings!) But, whatever! (An incredibly popular term with today’s twenty-and-thirty-still-living-with-mum-and-dad folks!) However (popular with young forty-somethings), I must refocus! Must get back to our Nigel!

Nigel, just wondering, but have you ever considered swapping that tweed jacket for ….?’

Time to do a leapfrog manoeuvre over the bar!

Nigel’s brandishing around the microphone and, judging by his expression, it’s with murderous intent. The title of his Edinburgh Preview is ‘Mocking a Murderer!’ So, I guess that really, I should have come prepared for anything. But, as I related to you earlier, I arrived late – I didn’t know that Nigel was going to be on, and I didn’t know either that this evening’s gig was scheduled to begin at 7.30!

‘PJ! Why don’t you ever tell me anything? (I know you say that you did, but I’m in mid-throe of the menopause; this means that my three-second memory is now official, and that you should, therefore (a fave word with the over fifties, i.e. PJ!*), have covered this in your staff policy for Mental Health and Wellbeing, and made adequate provision for my needs!’

Please note that Suffolk Punch Comedy Club gigs are on the first Wednesday of every month, at The Brewery Tap in East Street, Sudbury, Suffolk, and that they start – not at 8pm – but at 7.30am!

*Sorry, Comedian 2, at fifty you were not, after all, the oldest punter at The Tap that night! Here he is!