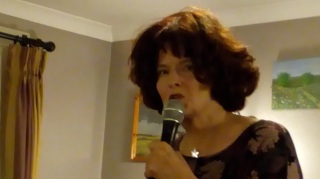 ‘Seventy-three and up for grabs?’ It’s Janet Benisworth! At last a genuinely ancient comedian; not just some early forty something undersexed male, claiming to be middle-aged, trying to get the female sympathy vote. And, even better, I’ve never seen such an old specimen sporting such lustrous-dark locks. I sit up and take notice. A great fan of slapstick humour, I anticipate that the loss of Janet’s wig, is bound to be far more entertaining than her jokes.

Janet draws us all right in there, right through her wrinkly-old-outer casing, and straight into the depths of her heart. Seems that Janet, like myself, is a fan of the multiple-choice love questionnaire, made so popular by the seventies’ magazine ‘Jackie’ (No, I’m not that old!). She’s also a great fan of the ginger, presenting us with a Prince and the Pea scenario. I can see it now:

I’m in the great drawing-room of Mansfield Park, sitting sewing in front of a great roaring fire, which is being regularly stoked up by a range of handsome manservants, when I hear a knock on the door. Something tells me not to send the butler. It’s pretty boring in my grand abode, with my wealthy older husband on one of his business trips, in the company of the untouchable lower classes. I gather up my skirts and go to open the front door. It’s a ‘bedraggled, attractive young man with red hair, milk-white skin and snow falling on his torso’, asking for a ……..

No, I’m not going to satisfy your thirst by revealing to you the rest of the story; neither will I grace with the choice of a), b), c) or d) responses that Janet proffered up to us. If you want to hear the rest, you’ll have to come to one of our comedy nights at ‘The Brewery Tap’ and see Janet for yourself …

… because, only slightly disappointed that Janet retained her wig, I’m now onto Big Alex. He’s newly-hatched – not much more than a foetus. But, he’s as miserable as a corpse.

Barely recovered from Janet’s bouncing up and down and dancing around the punters, seeking out the ‘ginger’ in us all, I can’t believe that this young urchin wants to crawl back into his mother’s womb. It’s not difficult to guess at the source of his depression – he’s been deleted out of the life of his one and only true love (besides his mum) – his girlfriend broke up with him over Skype! But when he starts carrying on about his mum’s advice, ‘that female availability will get better in his thirties, when everyone’s divorced’, I start to sympathise with the lost ‘love’. Who in their right mind, would want to date this depleted bundle of nothingness? The answer is nigh – I spot Janet eyeing him up and down. No, Janet, this guy’s not ‘ginger’ and he’s a nothing, a nobody – an handful of dust. He’s been finished with. He’s at the end of his time, and your life – at seventy-tree – is only just beginning. You’ve got  an eternal future in stand-up (thanks, to Jay Cool’s blog)! Get yourself out of here and hit the big time. Leave Little Alex be!

Forget Little Alex, ‘cos Olly’s on next.

He’s tall, gangly and ‘ginger’ – just your thing, Janet! And he’s another story teller into the bargain:

‘How my mum and dad met? Well, it was a very cold winter’s night, and my mum was sitting in front of a roaring fire, when there was a  knock on the …..’