Back to Myddle: Day Three of an Ancestral Journey

No more slow shuffling today – I have a four and a half mile brisk walk planned! I’m kitted out with a pack of ‘Gough’s Walks’, purchased from Saint Peter’s church (only £3, so go and buy your own!), and I’m set for the wider world out yonder – a circular middling-length walk around Myddle.

It’s an achievement in itself, just getting my children out of the lodge for a second day so, pleased with that, I cast aside all momentary thoughts regarding sensibilities such as bottled water and snacks, and march on – with two reluctant foals in tow. “And just how far is this walk, Mum?” someone whinnies. “Oh, just a short one – about a mile!” I lie, without any guilty conscience whatsoever. And, we’re off!

Gough may or may not be an ancestor of mine, but through his account of the lives of Myddle villagers in 1700, I know that he frequented many off the same locations and, as such, must have rubbed shoulders with, or at least have been irritated by many of those who did have the good grace to pass on some of their finer genetic materials to me, so I’ll stick it out with Gough, just for now – until I catch up with Scoggan!

We go past the school, at which the my Grandad had dealings with the Headmaster’s cane, past the old well and drinking pump, past Saint Peter’s church, up the road and turn left. Farm territory. This is the real countryside. Will I make it. It’s a long track! “How much further? How much further?” The whinnying starts to get out of hand, but we are saved by the appearance of Hollin’s Farm, and I regale my children with stories of tenants past, including the bigamist, William Cleaton (surely not one of my ancestor’s, although the variant spelling of Clayton, does feature rather to often in the tree for my liking!). Regale is too strong a word, as they are not really very interested at all, but we take some photos anyway, and march onwards across the fields to Webscott Farm.

This might sound like fun, but it’s not so great when with a child who is phobic about most things, including wasps and … cows. The public right of way invites us through a field full of cows. There is no way we are going through there! Fortuitously, a pathway seems to open up to us to the left of the field. I am reminded of the Bible story, when to go forth seems impossible, until the waves part and a pathway miraculously appears through the Red Sea. Everything is possible, if you want it enough! In any case, the cows turn out to be friendly types, and I stop for a chat with one of them. 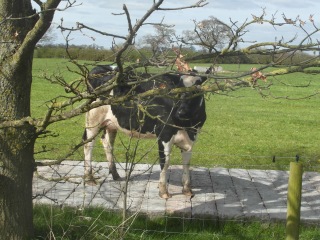 A very good time is being had by all. “Mum, I’m thirsty! Mum, I can’t survive much longer. I will die of dehydration!” Even more fortuitously (my new favourite word!) a friendly farmer’s face pops up from behind some cows (Where did he come from?) and he is able to offer us some reassurances. “Yes, you are going in the right direction. Scoggan’s Hole is just a bit further up. Go on past my house, Webscott Farm on the right, and you’re almost there!” Great, let’s go, kids!

“I’ve never seen the cave, though, so I hope you find it!” Oh, so much for the reassurances; I’m on a quest to find a cave, once lived in by a man called William Preece, otherwise known as Scoggan, that the farmer who apparently lives right next to it, hasn’t even seen. The children’s groaning and grumbling continues. “You’d better not have dragged us all the way out here for nothing, Mum!” But, all is not lost, the map specifically states that the ‘Goblin Hole’ is just immediately opposite the stile onto the Lower Road. And we’re here …

More sand-stone rock faces. Lots of sand-stone rock faces. No cave. Where is it? This time, I’m the one doing the groaning and grumbling and the children are right onto it. Animated. It’s like a game of Hide and Seek and they’re loving it. Far better to be looking for the Holy Grail, than to be actually sitting inside it. The children disappear. I feel momentary concern, before spotting what looks like the remains of a four-walled room with an entrance – but no ceiling – hardly a cave! But this must be it, as it’s exactly where the map indicates. But where is the grand stairway that is supposed to lead up to it? Just a big tangle of shrubbery and someone’s garden fence! How can it be that someone has been allowed to subsume my ‘cousin’, William Preece’s abode into their garden?

I don’t really have a clue whether Scoggan is one of my ancestors (I’ve yet to make a connection with him on my family tree!), but it matters not, as I feel affiliated to him, just by virtue of circumstance.  The notes that accompany the walk, detail how Scoggan went to war for Charles I, sporting a crooked leg, a disability acquired as the result of a fall from a pear tree; my Great Uncle, the one who injured his leg and still fought in the Great War, was surely his reincarnation!

“That’s not a cave, Mum!” A case of sour grapes, I conclude – they are just miffed that I was the first on the scene! With the help of a sheet of tarpaulin, the roof could soon be repaired and it could all be made very cosy. “Are we done now?”

Okay, back. We turn the corner of Lower Road, and there it is, just yards away – The Red Lion Inn and Lodge! A four and a half-mile walk, when we could have walked along Myddle Road in the opposite direction, turned the corner, found the Goblin Hole and been done with, all within the time-scale of about fifteen minutes. Still, the photographs are lovely (ruined by previously-undetected jammy finger-prints on the camera lens!), the children are knackered and my knees are done for.
A lodge. A fridge. A toaster. Laptops. Let’s burrow on in!

Disclaimer: Please refer to the ‘Who is Jay Cool?’ post for details.

2 thoughts on “Back to the Myddle: Day Three of an Ancestral Journey”