Back to the Myddle: Day Eight of an Ancestral Adventure

Reclamation. Whether I be at home in Shropshire or in Suffolk is a dilemma that can only be solved by checking out my territory – by a full survey of my lands and properties.
I can’t believe that I once stood in a classroom, zoning out the din, staring out at the wonderful view – a vast playing field – whilst planning an escape from my teacher’s life of 24/7 drainage and drudgery, when all of that time I could have been just a few hundred yards away, perusing my estate from the vantage point of Clare Castle. I’m so sorry, kids, that I made you construct castles for homework! By rights, slaves, you should have been out there, building the real thing!

My ancestors in the Myddle were all stonemasons – and that all makes so much sense now. Each new generation was trying to grab just a little bit back of what they had lost, reconstructing their castle walls, one man and one brick at a time. Clare Castle. Ludlow Castle. Myddle Castle.  Yes, thanks to Great-Something-Uncle Humphrey Kynaston, they even lost Myddle Castle – and that was only a trumped-up manor house. But, I’m back. I’m back in Suffolk, and Clare Castle is just ten miles from my crumbling shed in Sudbury. My carriage, a miraculous survivor of the trip back from Myddle, awaits its Lady and her issue.

And we’re away. Away to Clare and I might even find my way this time. I made this journey, twice a day for six years. So that’s one up for you – long-distance-map-head savant of a cousin! Sat Nav not needed!

“Are we going the right way, Mum?” Yes, of course we are my heirs. Why would we not be? When have I ever got lost?

I park up and, unbelievably, find that I have to buy a ticket! A ticket to park on my own land? But that’s a minor issue – I’ll be talking to Clare Town Council about that later – because there it is. Clare Castle. It’s like a Barbie doll palace, or something out of a Disney film, perched on the crown of what must be the tallest mountain in the UK. No, it’s not Elsa’s ice palace, so please, please, please – my wonderful daughter, Princess as you may be, do not start singing that awful overdone-at-caravan-talent-shows ‘Let it Go!’

I want to be at my destination, but I’m puffing and panting and my issue are sprinting ahead. Don’t they know it’s not appropriate for the gentry to risk life and limb? I feel like I’m on a helter-skelter, going round and round, and I’m getting dizzy. Only, it’s not so much fun going up and up, rather than down and down, and I’m thinking I might not make it to the top. Still, if it comes to it, my heirs can stake our claim with the marker I’ve given them, the mug mat that bears our coat of arms.

Somehow, though, I make it and I’m here. I feel a little affronted that some commoners seem to already be here – standing and chatting loudly – in my living room! But, I hold my tongue, because I’ve been doing my research and my predecessor – First-Cousin-Numerous-Times-Removed Elizabeth de Burgh (Lady of Clare Castle) – was most generous with the poor. And, it’s important that one maintains standards!

I stand next to the castle wall – there only seems to be one of them – and allow my under-studies to capture the moment on my Motorola phone’s camera app. Tesco, you owe me some shopping vouchers for this one – you can deliver the goods without too much problem – once I’ve had the chairlift installed.

Once I’ve got my breath back, I do a slow regal-style walk over to my garden wall and peer down. It’s quite an extensive view, both across and down, which is unfortunate to say the least, because I’m still dizzy from my ascent. So, I take a few large strides backwards. You might be thinking that it’s impossible to stride backwards but, believe me, it can most definitely be accomplished. My daughter steps forward to Motorola the view, and I realise that we are under attack. The guards must have fallen asleep. My son wants the Motorola because he’s installed a Pokémon App on it, and he’s bored. Bored? How?  There is much squawking and squealing, as the lovely siblings spear each other in a bid for exclusive rights to the crown jewels.

But the interruption is a good thing because, moments earlier, I had been planning to intervene in a discussion the commoners were having about whether to buy or not to buy a house in the village of Clare. Why did they have to come all the way up here, to my castle, to take in the view? Why didn’t they just enlist the help of an estate agent for a close-up tour? None of my servants rush to my aid so, like Joan of Arc, I take up arms and take back control of my Motorola – a preventative measure, as I fear it might be launched over the cliff, ready to do it’s own close-up tour the village!

I’m not ready for a fast descent, so we decide to take a gentle stroll along Lady’s Walk. The name Jay de Clare rather suits me, I feel, and I imagine I’m walking down the red carpet at the Bafta Awards, so I’m not overly chuffed to find that the access from the walk along the battlements to the steps down is blocked by an ugly work-in-progress stop sign. Why has my property been allowed to fall into such a state of disrepair? Only one wall and a crumbling stairway. With cuts like these,  won’t be voting in the Conservatives at the forthcoming election. In fact, I won’t be voting in any political party. It’s high time that the tables are turned. I’m now a Royalist and will be taking action forthwith.

Although it is beneath my dignity, we all about turn, and go back down the way we came up. The helter-skelter comes into it’s own (We aren’t even provided with rugs to sit on!) and it’s a speedy fall for all. We are more than a little worse for wear, with scuffed bottoms and bruised egos. Nonetheless, we march onwards… Because, if I’m going to take a rest, I will do so in the company of my ancestors. 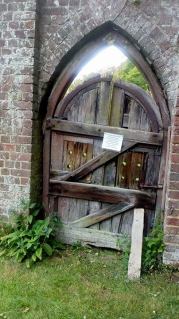 Another job to pass on to Maintenance – the wooden door to the priory’s walled garden is blocked – a preventative measure, as it’s pretty rotten! So we find another route in – through an open window. I’m scared I might see a monk. Because the last time I saw one, at a Christian camping rally in France, he told me off for hiding out in my tent instead of attending the morning service. If I had only known then, that I was a direct descendant of William of Normandy, I’d have had the monk beheaded there and then. But I’m not so sure that my kindly cousin, Elizabeth of Clare Castle, would go to such extremes. And, I’m here, in her name, trespassing in the grounds of Clare Priory.

There are no monks to be seen, just a

long table-like structure, some kind of a stone alter, not dissimilar to the one that Aslan received a hair cut on, from the evil Narnian ice Queen. I must be getting close to my resting place. But further investigation of the table of offerings reveals nothing. I turn back.

And then I see it. There’s a plaque on the stone wall, just below the window through which I entered. I clambered in over the bones of my ancestors. For here lies, my Great-Something-Aunt Joan of Acre and her Great Granddaughter, my Third-Trillion-Times-Removed-Cousin Elizabeth de Burgh II. I don’t have time to offer them my apologies, because my son’s in a nervous state – he’s very law-abiding and, too late, I realise that I should really have told him about the sign on the way in that said ‘Visitors welcome!’ He’s running around in circles, flapping his wings, ready to take off. “Come on, Mum. You’ll get into trouble. Come on! Let’s go!”

Okay, fair play. I take a quick Motorola selfie and we escape.

I flick through my pics and realise that I look hot next to a dead daffodil and some even deader ancestors (hence, some serious cropping of the photo!). Perhaps I’ll be picked up to be cover girl for next month’s ‘Hello’ magazine. It’s about time for my cousins, Catherine and Will, to step aside. Their royal claims are less than plausible. And now …

All photographs are either the author’s own, or are in the public domain.