Been an age since I’ve had the pleasure of a (no, not that!) pint of mango cider. The taste of rotten apples is by far superior to the taste of whatever was on your mind (yes, I’m well aware of the quality of my readership, thankyou!)!

But it’s been well worth the wait, as I’m greeted with a sight for sore eyes. My bestest comedian, Joe Fletcher-Cross, is on our comedy club billing tonight, and she is looking absolutely stunning. I’m not sure when she’s been in my house, but she’s dressed up as a replica of my wonderful book-filled study. Grab your sunglasses and take a look at this:

Joe is the real thing – a book lover’s paradise! I book my flight and attempt to jump straight on in. Tragically, I am held up on the walkway by an over-zealous flight attendant, who tells me I’m not allowed to take my own booze on board. Sorry, Joe, I’ll come back to you later!

Luckily, sitting across from me is Dom Mackie, my other bestest comedian, and judging by the ricketty table his pint of beer (yes, you tell me it’s a soft drink, Dom, but I know alcohol when I see it) is complaining about, then I reckon Dom’s been here at The Tap, for quite some time. A pub table is really not the best place for a rendezvous with one of the local babes, Dom. Next time, treat yourself to a luxury room at The Mill. At this point, Dom abandons said table and brings himself over to join the literati of Sudbury. He looks chuffed with himself – not at all surprising, as he had just joined the ranks of the world-famous blogger and photographer, Jay Cool! Pencil-ready, I get down to business (blogging business, you lusty low-life!).

Danny Mark’s up first bemoaning the rising cost of Tesco’s Value shower gel.  Looks like he watched ****, before making his New Year’s resolution to stay dry. Unfortunately, he seems to think a dry month entails smothering oneself in gallons of blue gel, and then treating oneself to a blow dry, minus the pre-requisite rinse – all in some grand effort to save on water bills. And this is what we are presented with:

which might have been quite sexy in a cool and detached kind of a way – but, hey, Danny, don’t stress! One can’t have it all, can one? And us punters at The Tap, quite liked the old you. You remember? The one in ‘better shape’, with a couple of stone’s worth of padding around the waist for the punters to get attached to! This Danny Mark:

Ryan Cork’s up next and he’s here to lift us all out of the blue doldrums: 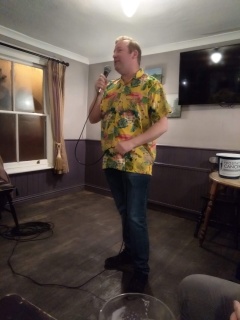 His Hawaiin- style shirt doesn’t quite live up to the momentum created by Joe’s bookcase, but it does transport me (and everyone else? No, I’m there on my own!) to a sun-filled beach, full of a young Hasselhoff, whose man tool matches the colour of Ryan’s cheeks:

Drawn back into reality, I settle myself in to be entertained by Ryan’s worldly tales of weed, Sudoku puzzles and Teletubbies. To be fair, then I do see Ryan’s link with the latter;

I decide it’s time to abandon Ryan and his rants about goats’ piss, egg plants and lady gardens, in favour of a chat with Joe Bloggs, soundman for the ‘Lady Boys of Bangkok’. Because a freelancer’s life is all about networking, and I wouldn’t mind going on a tour with the ladies. Reckon they need a blogger, Joe? Can you put a word in for me? Pass on my calling card?

But Joe’s not listening. Our next comedian, Jake Sears has taken to the stage, and Joe Bloggs of Sudbury is utterly and totally transfixed.

I turn to take in the competition. And what I see before me is not Jake Sears, but a cross between Michael Buble, Adolf Hitler and Donald Trump: 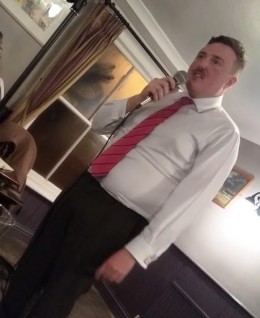 To be fair, then Jake does tell better jokes than his doppelganger Trump and, as I absorb the fallout from Jake’s ‘dripping sweat’, ‘wet farts’ and  ‘premature ejaculations’, I become a truly sodden convert. This man’s no Hitler; Jake’s got balls in the plural! Is there nothing our Jake from Hemel Hempstead can’t do? Can he be an old lady’s dream?

I take myself off to the ladies’ for a quick blow dry and return just in time to witness the splendid state antics of my No.1 comedian, Dom Mackie! I’m disappointed. He hasn’t taken my advice; instead of selling himself as clone of Edith Head, he’s still laying claim to be Sue Perkins’ twin! I ask you to judge for yourself, who is correct on this one!

Turns out our Dom’s trying to hit the big time; seems that The Brewery Tap, Sudbury’s equivalent to the O2, isn’t able to contain him any longer. Our Dom’s just applied for a spot on ‘Love Island’ and, due to his dodgy but successful identity fraud, his application’s been accepted! But, being best mates with Caroline Flack, I’m in on plans for the next ‘unexpected’ plot twist:

Keep checking out Jay Cool’s blogs for updates, as we chart Dom’s progress from the small-time East Anglian comedy club circuit, to celebrity status, as he hosts his own Hebridean show.

In the meantime, compere PJ, braces us to prepare ourselves for the climax; for the one and only and very excited Joe Fletcher-Cross! Whilst Dom’s been planning his escape from Sudbury’s hotspot, Joe’s travelled 500 miles from Glasgow – sustained on a diet of hot cucumbers – just to be here. Here in the midst of it all. Here in the throbbing crowds of the drunken old letches of Sudbury. Why? The answer’s in her genetic heritage; Joe’s fearful of falling prey to ‘The Glasgow Effect’. She tells us that folk like her have a low life expectancy. For Joe, this is all a one-off, a last chance saloon trip – the experience of a lifetime.

Don’t fret, Joe – leave us your dress (signed!) and, through the words of wisdom in that book collection, you can live on forever.

Come on, while PJ’s doing the closing blurb, nip into the ladie’s, whip it off and hand it over. No, you won’t look at all silly flying back to Glasgow in your undies! That sort ot thing is all the rage these days!

To see more of the aforesaid comedians for yourselves, be at The Brewery Tap, East Street, Sudbury, Suffolk, on the first Wednesday of every month for an evening of free entertainment and laughter. The Suffolk Punch Comedy Club gig starts at 8pm, but there are barrels of mango cider and rickety tables aplenty – for the convenience of early arrivals.