A name that reeks of issues of disassociation with his true vocation as role-model for the young, as ‘surrogate parent’ for our nation of fatherless boys. Further hints of his discomfort with his paid profession, are revealed in his first joke. A joke about step-parents having less affection than biological parents for their charges, followed up with a retelling of a Bible story. Seems that Joseph and Jesus didn’t get on well, hence their attempted fusing of disparate genes in joint efforts over carpentry joints. Well, I’m sorry Anon, but our emcee PJ, isn’t up for paying you one single penny. So, best not give up the day job quite yet. But, not to worry – our PM, Theresa May, is introducing compulsory parenting classes for teachers. Pretty sure this’ll fix your bonding issues!

If any kids out there are wondering whether Anon is the teacher that ‘picks on them’, the one who lords it over them military-style, then I’ll give you a little clue to help with identification. First name rhymes with Anon, and his surname conjures up this image:

And the great news is, that any reader who correctly identifies the first comedian in Suffolk Punch Comedy Club’s November line-up, gets free entry to our December gig! Just forward your best guess to PJ, via our Facebook page. Photo-shot of PJ coming up:
And, just to help you along, here’s the next clue:
ANON LOOKS IDENTICAL TO THE CHARACTER OF TWITTY IN EVEN STEVENS!
Still Anon’s classroom experience makes him ideally placed to bend down at the feet of his successor, comedian Danny Mac! 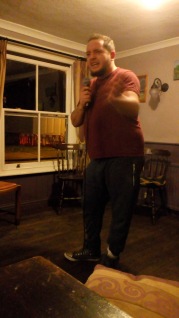 Our Mac’s struggling with his shoe laces, after his local Clarks’ shop ran out of trainers with Velcro-fastenings. Anon, get yourself down there, before Mac starts tripping himself up! Don’t hang around down there for too long, though, no time for any arse licking! Mac’s a little accident prone. Lost his last job, driving buses, after his ex got hit by a double-decker! I can see tomorrow’s headline now:
‘POPULAR TEACHER STRANGLED BY SHOE-LACE!’
Funny how, post-humously, the most-hated of teachers, are always the best!
Sadly, the sight of a mangled mess of Anon and Mac, on the once-pristine floorboards of The Brewery Tap, is too much for our third comedian – old John the traveller. In spite of having a weak stomach (clearly not a descendant of Elizabeth I), our John’s managed to set sail across choppy seas to experience Delhi belly and Turkey tummy. Even so, he’s ill-prepared for the takeover spot! Where’s the bar manager when he’s needed?
‘Oy, Barman, get yourself over here and clean up the vomit. Get the sand ‘n’ sawdust bucket out!’
‘What’s that you’re saying PJ? John is the Barman!? Time to step out of your comfort zone, PJ! Time to step up to the occasion. Vomit bucket needed! NOW!’
Out with dodgy-belly John, and in with Big Dan from Ipswich. In his own words, our Dan’s ‘one pork-pie away from a heart attack’ and a sufferer of ‘toilet anxiety’. Little else is needed by way of summing up this particular lump, except that he’s saved from the aforesaid heart-attack by a pork-pie and beer induced squelching sound, and a run to the conveniences. He’ll be in there a while, as he tries to work out how to depart from his chosen cubicle, without every punter in the place photographing the perpetrator of the eggy toilet stench – evidently, he likes the type of pork-pie with a golden egg shoved into the centre. His efforts are in vain. Here is the eggy-poo perpetrator:
Next up’s Dylan Dodds, and a plea for us to sign up to his campaign for inside-out dildos for men, to be available on the NHS.
Like the deceased Anon, DD’s not ready, yet, to be a father, and he stands in front of us mocking celebrities who name kids after awards. Personally, though. I’ve come to the conclusion that DD needs to put a dampener ASAP on his campaign, unless he wants a pint-sized kid, identifying as a gender-neutralising lump of plastic, going by the name of Dildo Baggins.
Just as well, that Adam Bromley’s our headline act. But as the shorter-than-a-pepper-pot comic launches into a tirade about how his comedy works best without an audience, hence why he prefers his own front doorstep as a platform for his performances, the amateur genealogist in me cannot help but begin to speculate about any possible connections here. Surely Dylan Dodds isn’t old enough to be the father of …? Is he?
Copyright owned by Jay Cool, Suffolk Punch Comedy Club’s blogger extraordinaire!
Photographs by photographer extraordinaire Jay Cool (with the exception of ‘John’, who was stolen from The Brewery Tap’s Facebook page!).
If you have enjoyed reading my nonsense, please come and see our top-performing comedians for yourself, by joining the crowds at The Brewery Tap, East Hill, Sudbury, Suffolk, from 8pm, every first Wednesday of the month.