A vacation in the loo?

Not unless I fancy a pee – in Wenlock Priory’s reredorter!

Ever had that nightmare? You know the one when you are desperate for a p***, and you spend ages hunting down the public amenities, only to find that the only available toilet is truly on public display. Being a modern lady you are wearing trousers, so all has to come down, before you can sit down and … be seen by everyone for miles around!

That’s all the explanation needed for the reredorter, so I jig around from foot to foot, and Morris dance (1) my way out of Wenlock Priory in the direction of the town. Surely, Much Wenlock must have a Café Nero, with a convenience for the merry footed?

Within seconds, my jigging finds me in a shopping street. I can see the sign for the Post Office, but I need a Café Nero. I do a quick entrechat into the skies to try and see what might lie beyond the red. 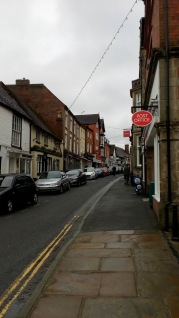 I can’t see Hubby, Uncle, Mother or the sprogs and, more tragically, I can’t see any Café Nero sign. I have a sneaky suspicion that my entourage are, at this moment, enjoying coffees and milkshakes, having already relieved themselves of any excess liquids from our breakfast refreshments. But, if there’s no Café Nero, then in which alternative venue have they seen fit to deposit themselves? 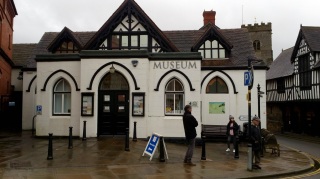 Hubby’s stance, arms folded, looks resigned. And the sprogs look bored. Mother and Uncle are no-where to be seen – definitely in a café somewhere! I’m guessing that there’s a lot of whining going on, so I jig on past my entourage, and right on in to the Tourist Information Centre and Museum. Luckily, in spite of its historical status, the museum has updated its reredorter to a flushable loo and it turns out that I can even do my piddle in private. This is all well and good, but I hop (no need to jig anymore) back into the museum to find that the Sprogs have followed me in.

“Come on, Mum! We’ve been waiting for you for ages and we’re hungry.”

“Okay, well, I’ll just take a quick look. You go on with dad and find a café, and I’ll catch you up!”

But, it doesn’t seem like Hubby’s going anywhere. I’m guessing he’s checked out the prices round here! Still, I’m going to take a look, now that I’m here. I find out lots and lots about someone called Dr William Penny (2), who I’ve never heard of, and someone else by the name of Mary Webb, who I’ve never …. Whoops – she’s the author, and I have a degree in Literature! So yes, of course, I know all about Mary Webb (3). The sprogs are still whining, so I take a super-quick glance around, and then grab some leaflets. Remembering (just about) that I was once a sprog myself, and that I hated waiting around for the adults on an empty stomach, I decide that Google can help me out with my research later on.

Whilst hunting around for a cheap café, with sprogs in tow, I see lots of opportunities to snap away with the Motorola.

Groceries are being sold at market stalls, on the open plan ground floor of a Tudor building called the Guildhall, built back in 1540 as a place to hold court proceedings following the dissolution of Wenlock Priory – by my fourth-cousin-one-times-removed, Henry VIII.

I’d like to say that justice became softer after fellow red-head, cousin Henry, got his own way, and rid himself of the Catholic Catherine of Aragon (none other than my eighth-cousin-seventeen-times removed); one really would think he’d be in a jovial mood, once hitched up to my fierier cousin, Anne Boleyn (third cousin, fourteen times removed!). But, clearly not so!

The court at the Guildhall sentenced two poor unfortunates to death in its first year! I make a mental note to find what offences these two committed. Perhaps they made public nuisances of themselves, jigging around the town pretending to be Morris dancers! More for Jay Cool, blogger and historian extraordinaire, to investigate.

En route to the cheap café, we bypass several gentrified venues, and end up at the church. One can hardly bypass a graveyard, without being drawn in to inspect the church’s interior – all out of respect for the departed souls of Much Wenlock, of course.

Immediately, I can see Henry VIII’s destructive handiwork. It’s all very plain and simple. Lots of whitewash, framing a Norman arch, leading to the Gothic arch of a window, with the most beautiful stained glass. I exaggerate? Well okay then, the Gothic arch of a window, encases the fine master-ship of a double-glazing company, allowing the light of the spirit to shine in and speak directly to the people of the congregation, without needing the intermediary of a stained-glass representation of Mother Mary. May God be with Zenith Windows! 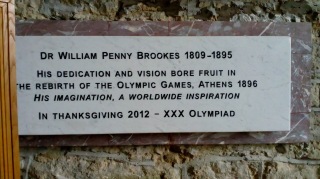 I also locate a very informative plaque dedicated to Dr Brookes. It is now apparent that he was famous for bearing fruit, so I’m guessing he was a popular local market-stall holder, who happened to have been born into a family who owned an apple orchard. (Okay, I can read the rest later – the sprogs are still pestering me for grub!) 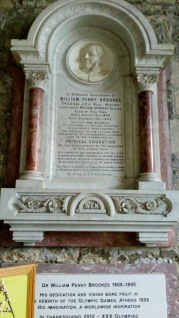 It does have to be said, though, that for a fruit-grower and seller, old Brookes must have been pretty successful to be commemorated with plaster cast of his own head. I’m guessing it cost someone a fair fortune to mount it high up, and at the entrance of some kind of doorway into the old man’s soul. 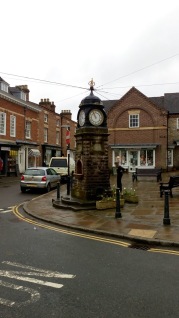 At this point, I give up on dead souls, and give in to the sprogs. A café is found. It’s not particularly cheap, but the coffee’s good and everyone’s happy – at last!

And outside, and beyond, Wenlock’s trees do look pretty creepy!

Still, in spite of the rain and the gloom, the day is still young.

“Yeah, hurry up, sis, ‘cos I need to get back to get onto the internet and look up …”

“You can forget that!” I helpfully interject. “It’s Bridgnorth next!”

Copyright of text and photographs owned by Jay Cool, April 2018

(1) This seems an appropriate moment to thank my Humanities teacher from my days at Immingham School. Mr Ives ran the most fantastic lunch-time Morris dancing club, and the team won many competitions. Okay, so I wasn’t on the team, as due to my irregular height, I was better suited to being an inanimate May Pole, than fitting in with a public display of shorties – but, that’s besides the point! The point being … ? Oh yes, the point being that my Morris dancing skills, as a redundant onlooker, were honed to perfection, when it came to acquiring a specialism for the foot to foot jig; the jig that gets one from A to B without too many little leakages en route.

(2) Further reading of the plaque, courtesy of my Motorola, now informs me that Dr William Penny Brooke was the founder of the modern Olympics! I’ve never been the sporty type, but my Grandfather Arnold Cool, was Treasurer of Albrighton F.C., Sprog 3 is a talented footballer, and both Sprog 2 and 3 have won lots of 1st places on the school sports days. Even Sprog 1 once helped her P.E. teacher through an OFSTED inspection, with a swift tackle in a game of hockey. A lot of hyperbolic boasts from a proud mother? Yes, but you’re missing the point here. What this actually means is that Dr Brooke is for sure, one of Jay Cool’s ancestors. I don’t recall the surname Brooke being on my family tree – BUT IT WILL BE SOON!

(3) As for Mary Webb, then I have hundreds of folks called Webb on my tree. And the evidence is mounting up on finding that Mary Webb was born Mary Meredith. The DNA trail for both surnames is hot, hot, hot! Besides anything else, Grandad Arnold Cool’s best buddy was called Mr Meredith, and Nanna Joan Cool’s partner-in-crime was a Mrs Meredith. Any slight doubts on this score have been put to rest by a quick perusal of Mary’s novel ‘Precious Bane; Mary was an expert on all things bird-related! Sprog 2 (bird-obsessive!) is, therefore, Mary’s identical twin. I must get find the time to email a thankyou message to the creator of Dolly the sheep!

Photo of reredorter (not taken at Much Wenlock!):