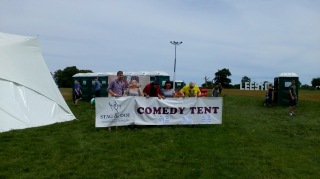 I’m here at Leestock, at last. I’ve located the Comedy Tent and I’m all excitable! What a relief! I’m jumping up and down and can hardly contain myself. I can see that the renowned comic, Kahn Johnson, has taken the stage, and that the crowd is loving it. Loving it and loving him! What a relief indeed …
But it’s not Kahn and his jokes about Trump relieving himself that have got me going. No far from it or, rather, close to it! With me, you see, it’s all about location. The thing that’s got me hopping about from foot to foot is a sight for sore eyes – I’m standing right next to a Tom Hardy doppelganger! But no, not even Tom’s identical twin, the self-acclaimed-sexy-voiced-comedian Will Jones, is doing it for me. There’s something better. Something – lots of somethings – much, much better! And I’m thinking that I might even try my hand at some on-the-spot impro’ comedy, and shout it out loud – turn my back on my selfish ways – share a little bit of my discovery with everyone – steal some of Kahn’s thunder! But, I’m not really like that – I’m not at attention seeker, so I restrain myself and hold it all in …
And, in any case, Kahn’s off and Tom’s on.
Tom’s peeling the layers off his old landlady, a fine woman with traditional values – you know the type! The sort who invites Tom Hardy lookalikes into her sitting room and pats the space next to her  on her soft and squishy two-seater – the only available perch – whilst pouring her next victim some of her finest Indian tea, into a fine China teacup. And, when seated, she leans into him, whispering softly into his ear about why the only available bedsit is in a bit of a mess, with a bit of a bad aroma, and an unmade bed, and why he can’t possibly go in there, quite yet, to take a look for himself, because the last tenant is still in there, having a ‘lie-in’ – quite a nice student really, but – it’s just that she’s Chinese you see. And the tenant before that, well he was an Indian lad! And you know what the Chinese are like – and the Indians – all the noodles and the curry – all the lingering smells – all the flatulence. And I can visualise exactly what Tom describes; I can see the old landlady; I can smell the odour – she’s leaning in, getting closer, lingering, her tongue hovering around his ear-lobes …But, she pulls back!
She pulls back, and I pull back, because something behind me has drawn me back – I can’t hold on. Tom Caruth’s on next, and I don’t want to miss out on anything. I need to go somewhere and  I need to go there now.
I force myself to de-magnetise myself from Will Jones’s deep, deep eyes and sexy tones and I turn to my rear. Not to my rear end, but to the scene behind me – the one that so excited me on my arrival. The Comedy Tent is pitched right next to a fine row of Portacabins, complete with Portaloos. It really does bring back memories of my Caravan Club childhood. And, to top it all off, there’s no queue – I can take my pick! I can poo in any loo of my choosing.
I go for it and take a run up to the nearest and, hopefully, the cleanest. And it’s not at all bad, not bad at all. There’s still some bog roll left, and us lucky festival-goers have even been provided with some squelchy gel. But, it turns out that it’s antiseptic handwash – rather than some of that lubricating stuff for the middle-aged.
Still, one can’t have everything. And Tom Caruth awaits!

Copyright owned by Jay Cool, May 2017

If you want a share in the excitement, buy your tickets for the Big Comedy Night at the Ipswich Hotel, on 31st May via the link: havingalaughforcharity.co.uk/index2.html  The evening is organised by the Suffolk Punch Comedy Club and profits go to Prostate Cancer Research. Stand up in support of our men and be there!

You can also join in the fun at a free gig on the first Wednesday of every month, at The Brewery Tap, in Sudbury, Suffolk.

Now head over to the author’s ‘Back to the Myddle’ blog: